What a Speaker Needs to Know About the Media

The media landscape is broad, complex, and changing. Deciding on how to utilize traditional versus social media can be daunting. As a speaker, navigating the various opportunities takes time. Don’t let that deter you from attempting to make your mark. It is time well spent! Here are a few things to keep in mind when dipping into media.

Traditional media like television, print, or radio can have long lead times on the journey to the final interview or feature release. It is not unheard of for a magazine article to take up to six months or longer before you see it in print. On the other hand, social media is very immediate in its reach. Once you click ‘Post’, your message is available for all to see.

Social media is an excellent option when your message is time-sensitive. When promoting an upcoming speaking engagement, a new book, or an interview, social media is the best means of distributing your message quickly and directly to your audience.

Traditional media still has its place in your promotion portfolio. Who wouldn’t want a magazine feature or television interview? These are incredibly exciting opportunities. Utilize these options to support long-term goals. For example, your book or documentary is releasing in six months so submit media inquiries as soon as you have a release date. The goal is to secure media placements in line with the release date.

Nowadays, we take for granted that social media platforms are easy to use, lightning-fast, and a low-cost means to connect to your audience. This dynamic format means that the user can create a post, change a post, or even delete a post without much fuss or muss. No middleman needed. This form of editing and transforming a message is a highly desirable trait of social media.

Traditional media does not have that same flexibility. Once a news article is printed or a television interview airs, it is a stagnate piece of media. There may be a possibility of updating the online version of an article or interview but generally, once traditional media releases a story, it is final.

Social media, by nature of its user-driven platforms, provides more control over messaging than traditional media. You post and share what you want when you want. You determine what matters to you and distribute that content on your own or with the guidance of a public relations professional. Traditional media takes you out of the equation when deciding how and when your message will be delivered. Because traditional media has multiple articles, interviews, or segments to coordinate, there is always the possibility that your feature will be edited or canceled before airtime or publication.

Media in its many configurations is an essential tool for any speaker seeking to build their brand and create awareness. Traditional or social media can be effective and productive. Employ a mix of both to maximize your success! 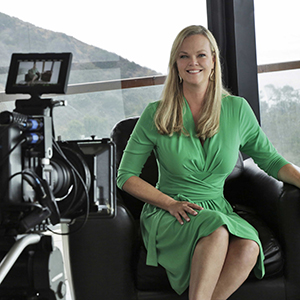 Kristen White is a Content Catalyst and Powerful Interviewer. She can quickly add the crisp clarity, magic dust and unique brand elements to any message, book, product or campaign.

Through her award-winning interview skills, Kristen will excavate and synthesize a personal story and legacy into a magnetic brand and content strategy. Her strong intuitive insight, journalistic training and versatile wordsmithing, offer clients a wellspring of fingerprint language options to apply to all levels of their written, spoken and video communication. Kristen is a bestselling author, award-winning documentary film director and cast member, television series creator/writer, and television on-camera journalist. As the CEO of Rock the Stage, Page, and Screen™, a digital media and marketing company, Kristen supports clients with unique personal brand development, speech writing and performance, book concepts, titles, outlines and marketing, and online business consulting.